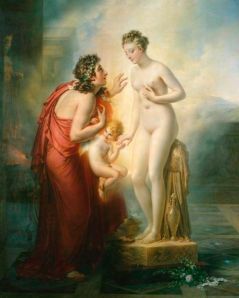 A few days ago, my colleague Prof. Kevin Warwick organised a Turing test competition at the Royal Society in London (in conjunction with the University of Reading), on occasion of the 60th anniversary of Alan Turing‘s death. Hailed as a success by some, the test left others with a distinct feeling that the results had left something to be desired.

The current set-up of the Turing test is somewhat different from what Turing originally proposed, namely a test whereby an interlocutor had to discern as to whether he (or she) was talking to a male or a female person (as opposed to a choice between ‘human’ vs. ‘machine’) through a computer interface. In other words, the way in which the test has since evolved has replaced the gender divide with the human/technology divide – an aspect that may be of some interest to psychoanalysts (and that should be of rather more interest to those who work on the technological side of it, unless they wish to operate in a historical and philosophical vacuum).

The field of ‘artificial intelligence‘ (AI) is a fascinating one – not only from the perspective of a tech geek (which I am not), but also from a philosophical point of view, triggering anxieties and fears alongside hopes for the future. It has been a subject of many works of art and literature – prominently featuring, for example, in the film The Matrix, in which AI is a deep, fundamental threat to human civilisation, or in the recent Swedish TV production Real Humans.

The fantasy that machines one day may resemble humans so closely that they become interchangeable is not a new one – there are many examples, including ones from the ancient world. A famous example can be found in Ovid‘s Metamorphoses, in the story of Pygmalion:

‘Pygmalion had seen them, spending their lives in wickedness, and, offended by the failings that nature gave the female heart, he lived as a bachelor, without a wife or partner for his bed. But, with wonderful skill, he carved a figure, brilliantly, out of snow-white ivory, no mortal woman, and fell in love with his own creation. The features are those of a real girl, who, you might think, lived, and wished to move, if modesty did not forbid it. Indeed, art hides his art. He marvels: and passion, for this bodily image, consumes his heart. Often, he runs his hands over the work, tempted as to whether it is flesh or ivory, not admitting it to be ivory. He kisses it and thinks his kisses are returned; and speaks to it; and holds it, and imagines that his fingers press into the limbs, and is afraid lest bruises appear from the pressure. Now he addresses it with compliments, now brings it gifts that please girls, shells and polished pebbles, little birds, and many-coloured flowers, lilies and tinted beads, and the Heliades’s amber tears, that drip from the trees. He dresses the body, also, in clothing; places rings on the fingers; places a long necklace round its neck; pearls hang from the ears, and cinctures round the breasts. All are fitting: but it appears no less lovely, naked. He arranges the statue on a bed on which cloths dyed with Tyrian murex are spread, and calls it his bedfellow, and rests its neck against soft down, as if it could feel.

The day of Venus’s festival came, celebrated throughout Cyprus, and heifers, their curved horns gilded, fell, to the blow on their snowy neck. The incense was smoking, when Pygmalion, having made his offering, stood by the altar, and said, shyly: “If you can grant all things, you gods, I wish as a bride to have…” and not daring to say “the girl of ivory” he said “one like my ivory girl.” Golden Venus, for she herself was present at the festival, knew what the prayer meant, and as a sign of the gods’ fondness for him, the flame flared three times, and shook its crown in the air. When he returned, he sought out the image of his girl, and leaning over the couch, kissed her. She felt warm: he pressed his lips to her again, and also touched her breast with his hand. The ivory yielded to his touch, and lost its hardness, altering under his fingers, as the bees’ wax of Hymettus softens in the sun, and is moulded, under the thumb, into many forms, made usable by use. The lover is stupefied, and joyful, but uncertain, and afraid he is wrong, reaffirms the fulfilment of his wishes, with his hand, again, and again.

It was flesh! The pulse throbbed under his thumb. Then the hero, of Paphos, was indeed overfull of words with which to thank Venus, and still pressed his mouth against a mouth that was not merely a likeness. The girl felt the kisses he gave, blushed, and, raising her bashful eyes to the light, saw both her lover and the sky. The goddess attended the marriage that she had brought about, and when the moon’s horns had nine times met at the full, the woman bore a son, Paphos, from whom the island takes its name.’

Ovid’s vision of Pygmalion resembles that of the development of the Turing test: the female – by which Pygmalion is repulsed in ‘real’ life – gets replaced with an artificial object, designed to give a more-than-lifelike, improved imitation of a woman. Eventually Pygmalion’s desire for his creation goes so far that he hopes for it to cross the object/human divide – a wish that in this myth was fulfilled by divine intervention.

This, in turn, however, means: in spite of Pygmalion’s great gift as a sculptor, he still lacks an essential skill that fundamentally divides humans from the gods of classical mythology: the ability to inspire actual life in inanimate objects.

Berliner. Classicist. Scatterbrain.
View all posts by Peter Kruschwitz →
This entry was posted in Poetry and tagged Big questions, Ovid, Turing Test. Bookmark the permalink.
%d bloggers like this: