Poverty and the Poetics of Underclass Morality 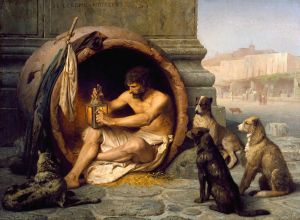 Is there a direct (inversely proportional) relation between (desired) material wealth and morality?

But by far the greatest blessing which you can confer upon your country and fellow citizens, upon yourself and your children, in short, upon all mankind, will be either to do away with the pursuit of wealth or to reduce it so far as circumstances permit. Otherwise, neither public nor private affairs can be regulated at home or abroad.

For wherever the desire for riches has penetrated, neither education, nor good qualities, nor talents, can prevent the mind from at last yielding to it sooner or later. Often before this I have heard how kings, how cities and nations have lost mighty empires through opulence, which they had won through valour when in poverty; and such a loss is not at all surprising. For when the good sees the baser by riches made more renowned and more beloved, at first he boils with anger and feels much perplexed; but when more and more each day vainglory prevails over honour, opulence over merit, his mind turns to pleasure and forsakes the truth.

In fact, endeavour feeds upon glory; take that away, and virtue by itself is bitter and harsh. Finally, wherever riches are regarded as a distinction, there honour, uprightness, moderation, chastity and all the virtues are lightly rated. For the only path to virtue is steep; to riches one may mount whenever one chooses, and they may be won by means either honourable or dishonourable.

Yet if you take away the honour paid to money, the power of avarice, great as it is, will readily yield to good morals.

True or not (though probably true!), the assumption that money and morality are somehow interrelated underlies a number of universal narratives and archetypical characters, including (but certainly not restricted to) –

The emotional appeal and persuasive power of narratives that combine references to (lack of) wealth with those to purity of heart should not be underestimated, when it comes to certain segments of the Roman society.

Already on previous occasions, I have touched upon several Latin verse inscriptions that featured manifestations of such types: for example, there was the poor coppersmith from Tarragona who was beloved by his friends and, of course, the noble self-made man known as the Mactar harvester, whom I mentioned in passing when I talked about the Faint Voices of the Poor.

In the context of that latter blog post, I also mentioned three further inscriptions, which unambiguously employ the money-vs-morality device – here they are again:

Titus Cominius, son of Gaius, of the Romilian voting tribe, from Ateste, soldier of the eleventh legion, aged 40, having served the army for 16 years, is buried here. A brother erected this for a brother.

I always lived well, as much as I could, poor, honest, I cheated no one. Now this pays off, meaning pleasure for my bones.

Quintus Caetronius Passer, son of Quintus, of the Publilian voting tribe, soldier of the third praetorian cohort, retired after 18 years under the consulship of the two Gemini [= A. D. 29], for himself and Masuria Marcella, daughter of Marcus.

I always lived well, as much as I desired, poor, honest, I cheated no one. Now this means pleasure for my bones.

Gaius Gargilius Haemon, son of Philagrus Agrippianus, freedman of the deified Augustus, while still alive; paedagogus as well as freedman.

Dutiful and august I lived for as long as I could, without lawsuit, without a row, without controversy, without debt, I lived up to my duty to my friends as best I could, poor in terms of personal property, rich in spirit. May he be well, who reads this inscription of mine.

The first two examples, funerary inscriptions for soldiers, work forward from the assumption that a blameless life is its own reward, suggesting that material poverty is easily outperformed by ethical behaviour.

The third example, for a paedagogus and freedman, expands on this motive somewhat further – creating an clear antithesis between material poverty and spiritual and ethical wealth in someone who led a life during which he never was a burden to anyone – someone who was rich and poor at the same time, showing these qualities in the right areas, respectively.

Poverty, paupertas, has thus been introduced as a concept that entailed honestas (honesty) and fides (dutiful behaviour towards friends), an absence of an inclination towards fraus (fraud), refrain from lis, rixa, and controversia (lawsuit, row, controversy), and – perhaps most surprisingly – lack of aes alienum (debt), which in turn may help to get a clearer understanding of how paupertas, as advertised on Roman tombstones, may have to be conceived.

The money-vs-morality device features in further poems, however, which are well worth considering.

Sacred to the Spirits of the Departed.

Halt briefly, please, hastening traveller, and gather my words as those of someone who calls upon you from beyond the grave, as you, too, must expect yourself this day will reach  you. I am Iustus, so called not by my father’s, but my mother’s name, and I lived born from a father who was poor in terms of wealth, but rich in terms of repute.

I called to arms the martial gladiators, challenging them with my tune, marking the changes with the luring tibia-player’s song.

The parents, for their incomparable son.

Iustus, the inscription suggests, was a tibia-player, a circus musician of low origin and status. The memorial, according to its text set up by the parents, refers to his father’s poverty, and, what is even more intriguing, to his name that allegedly had been derived from his mother’s name rather than the  paternal one.

What does this mean?

The main problem is the conundrum as to whether the remark refers to the only part of the name that is known to us due to its mention in the inscription – Iustus: possible, perhaps even likely; certainly not imperative.

Iustus is a cognomen (or supernomen) of sorts, i. e. a relatively highly individualised part of the Roman naming system that, at least in theory, could be imposed freely by the name-givers.

In that regard, if the deceased’s name ‘Iustus’ is a reference to a maternal name (Iusta? Iustinia?), it may be the case that the parents decided to honour the mother’s lineage that way (a practice that is known e. g. for second-born children).

It seems highly odd, however, to emphasise this practice in such a prominent and convoluted way (why not just say ‘the second-oldest son’ or some such?), unless the information does, in fact, carry additional meaning and something that is not self-explanatory is going on.

This may (but need not with any necessity) suggest that it was, in fact, not the cognomen ‘Iustus’ to which the inscription alludes after all: for the part of a Roman name that almost invariably links offspring to their father is not the cognomen, but the nomen gentile, the family name.

At least at an earlier stage of the Roman name system (to which this inscription does not belong), maternal gentile names were given – against the vastly more common practice to hand down the father’s family name – in only a small number of cases, e. g. for illegitimate children under certain circumstances.

On the other hand, especially in later times (to which the inscription would seem to belong), when the strictness of the Roman naming conventions had already broken down, maternal gentile names certainly appear in the context of legitimate children – for example, and most notably, in cases where the prestige of the mother’s family outperformed the father’s.

Is this what the inscription was hinting at?

Possibly (though the absence of any other listed parts of names in the inscription makes it ultimately impossible to come to any definitive conclusions).

Whatever the case may be, one must note that, despite its comments on the deceased’s nomenclature, both parents chose to remain anonymous in their final tribute for their ‘incomparable son’; yet, it gives the (anonymous) father credit for his personal achievements (famae dives) despite his poverty (pauper … quidem).

Blessed woman, the pueri [boys? servants?] erected this inscription for you, as you deserved.

Stranger, if it does not happen to inconvenience you, being exhausted, we ask you to read a little more, having just read the name: I was born to parents of libertine origin, both poor in terms of wealth, but of uncorrupted character. But my father bestowed on me everything he possibly could, with amazing care: I have been adorned with every good [ … years … ]. Behold: deceased I dwell here in a blessed abode. You, exhausted wayfarer, who have read this while passing by, may the light of life be sweet to you – and earth be light on me.

This piece does not only combine the poverty-cum-lowly-origin narrative (sum li|bertinis ego nata parentibus, ambis | pauperibus censu) with that of moral flawlessness (moribus ingenuis): it adds the ‘a better future for our children’ spin to it, suggesting that the father, despite his lack of wealth, tried to pave the way for his daughter, trying to facilitate a better life for her (sed m[i]h[i] qua[e potuit] mir[a] pater omnia cura | [largit]ur. [cu]nctis sum decora[ta b]onis), making the father’s efforts seem all the more heroic, selfless, and impressive.

There appear to have been further uses of this device in the Latin verse inscriptions; alas, the remaining texts are too fragmentary to get a clearer idea of their exact wording. In particular, one must mention –

However lamentable and despicable, poverty seems to invite the abuse and vitriol of those who are better off. This was no different in the Roman world than it is today, as Helen Lovatt has recently reminded us.

What the texts that are collected here have in common, in the face of such abuse, is that they exhibit a way in which those who self-identified as Rome’s poor (pauperes) felt they could reinvent their existences, aiming to turn a weakness into a strength through a narrative device that allowed them to redefine ‘true’ wealth: a wealth of character, and a wealth that money can’t buy.

1 Response to Poverty and the Poetics of Underclass Morality