Blast from the past

Posted on February 24, 2017 by Peter Kruschwitz

The Roman fabulist Phaedrus opens the third book of his Fabulae with the following piece (Phaedr. 3.1, my translation):

Says the crone to the amphora…

A crone saw a drunk-up amphora lying around,
exuding from its noble shell, with dregs of Falernian,
an exhilarating scent still, far and wide.
Greedily she inhaled it, being all nose, and said:
‘Oh sweet spirit! How can I describe how good you once were
when what is left of you is of such quality?’
What this may signify will explain who knows me. 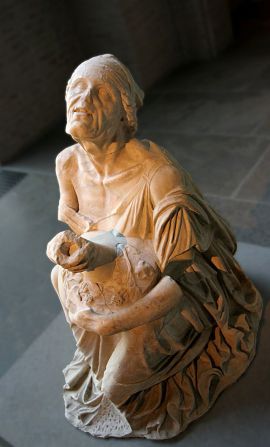 The ‘drunk old woman’ is a stereotype and stock character in Greco-Roman literature – and one that has famously found its most powerful expression in a sculpture now in the Glyptothek in Munich – a piece that (as far as I understand) was not at all designed to evoke pity, but to entertain.

Should we take it at face value? Is it a cheap crack at an old lady who can’t shake her addictions, an old lady so desperate that even a mere whiff from a disused wine vessel will provide shallow happiness?

Phaedrus tends to be rather more intelligent than that, and, unsurprisingly, scholars have taken a number of different views on the poem’s meaning. Justification for that lies in the poem’s concluding line – hoc quo pertineat, ‘what this may signify’, or, more literally, ‘where this belongs’.

So was it a poem to be read against the declining age of the emperor? Or is it a poem about the poet himself, his increasing age, and his poetry (as he opens a new collection of Fabulae)?

Poetry lends itself to manifold interpretations and re-interpretations, and, like with any work of art, the beholder’s preconceptions, emotions, and knowledge will be reflected in what is the centre of their attention. The poet’s genius is reflected in the piece’s openness to such readings and re-readings.

What puzzles me, however, is how much the focus tends to be on the poem’s Falernian dregs, as though the poem was about the residue and the remnants of quality wine (wine so good that even a faint memory, their anima, will still trigger compliments!) or about the vessel itself, a testa nobilis, a noble shell, that once was capable of the conveying a most precious load.

What if the poem were about the crone herself, as the title suggests?

What if Phaedrus carefully avoided the stereotype of the old drunkard as the butt of a cheap joke, rendering her a true connoisseur, someone experienced enough to tell quality wine from cheap plonk, happy to appreciate the good that is left in what is now an empty, unyielding shell?

What if Phaedrus, playing with our reflex-like urge to see stereotypes where there aren’t any, tells us a story about someone whom we might quickly dismiss as an old, miserable drunkard, but who, in actual fact, is of a very different nature: someone who, having taken a deep breath, rejoices over the sweet spirit as a faint, yet welcome reminder of a long-gone quality wherever it emerges – rather than to be disappointed over the lack of cheap roadside intoxication?

It may seem tempting, especially in stressful times, to read this poem as an expression of depletion and exhaustion.

But to do so means to make the wine the fable’s focus (and rejecting the role of the old crone in this narrative from the outset): a dangerous move when it comes to an author who, originating from a low social background himself, consistently exposes the faults of those who think that with power comes possession of the moral high ground.

It is the old crone and vessel itself that make up the very title of the piece, and it is the fabulist himself, rather than the old crone, who praise the quality of the empty shell as noble (nobilis) and the scent of the Falernian dregs as exhilarating (iucundum) – a scent that is still there, far and wide (late).

‘What this may signify’ (hoc quo pertineat) therefore (to my mind anyway) is what is said at the poem’s very centre: wherever one gets to encounter a delightful whiff of a quality that now appears to be long gone, take a deep breath and be greedy – take delight, praise the spirit … and never forget that this is only a faint memory of what used to exist!

Berliner. Classicist. Scatterbrain.
View all posts by Peter Kruschwitz →
This entry was posted in Poetry and tagged Alcohol and Perception, Blast from the past, Drunkenness and the Ancient World, Fabulae, Food for thought, Memory, Nostalgia, Phaedrus, Power, Preconceptions, Prejudice, Smell, Stereotypes, Wine, Women. Bookmark the permalink.

2 Responses to Blast from the past