Posted on December 19, 2013 by Peter Kruschwitz

Delivering my paper ‘Inscribing the Uninscribable’ at the ‘Manuscripts and Epigraphy’ conference (Hamburg, 15 November 2013).

Travel broadens the mind, they say. This may not always be the case, but it most definitely was my experience when I was fortunate enough to attend the conference ‘Manuscripts and Epigraphy’ in mid-November, impeccably organised by the Centre of Manuscript Cultures at the University of Hamburg. The variety of topics and papers at this conference was highly rewarding and truly inspirational.

Among the particularly remarkable discoveries for me at this conference was to learn of the existence of hundreds of thousands of (often fragmentary) lettered wooden tablets from Japan. These tablets, often fragmentary and never really intended to survive for a long time, are referred to as mokkan (木簡).

These documents from Japan contain a wide variety of texts and serve an equally wide range of communicative purposes. Unsurprisingly, they raise the same questions about literacy and handwritten communication as the graffiti and the letters that are preserved from the ancient Mediterranean, and, interestingly enough, due to the perishable nature of the material, they also raise the same questions about modes of preservation as the wooden tablets preserved from the ancient world.

A Mundane, Yet Primordial Need

Much to the entertainment of the audience (and to the bewilderment of the excellent speaker, I suspect), I was particularly struck by a set of texts discovered at the Former Imperial Audience Hall of the Nara Capital, a site that dates back to the eighth century A. D.: not only do they highlight the constants of the human experience, but they embody, in their beautiful simplicity and striking, humble straightforwardness, some of the very problems of current debate on ancient literacy.

The tablet that stood out to me from the presentation was this one:

The item advises: ‘do not urinate here’, and it is thought to have been directed at the workforce that helped building the site (again, raising some interesting questions over the recipients’ assumed low ability to decipher encrypted speech).

Signs of similar content are not unknown to our own cultural experience (note the faulty spelling of ‘deficating’, too!): 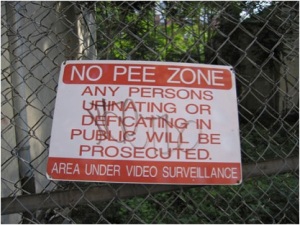 Texts similar to the above are known from the ancient world as well, of course. Some of them, like this famous example from Solin/Salona are rather monumental and ornate:

The text inscribed underneath a sculpted relief representing the goddess Hecate reads: Quisq(ue) in eo uico stercus non posu|erit aut non cacauerit aut non m|iauerit habeat illas propitias | si neglexerit uiderit (‘Anyone who has not dumped any filth in this village nor shat nor peed, may enjoy the mercy of her [sc. of the Hecate Triformis]; if disregarded, beware!’).

Matters of public hygiene, combined with religiously motivated threats (especially whenever seen in conjunction with the potential desecration of loca religiosa) are not uncommon – and many a tomb inscription explicitly prohibits such activities.

This raises an interesting question, of course, namely: does the existence of such signs, in the Roman world, presuppose sufficient literacy levels for the general public to appreciate the content of the text? Is it telling that the sculpture in the above example is rather more central to the overall appearance than the text itself? (But if that is the case, and if literacy levels are low, why bother in the first place?)

Is the religious context and markedness of texts like the above one from Solin/Salona the main and symbolic point – overruling the need to understand the content of the inscription itself (as would be the case with spells and curses, for example)?

Classical Scholars tend to be overly (and unduly) pessimistic when it comes to literacy levels in the Roman Empire – surely there is a difference between those who could decipher a simple message (or compose one) and those who were able to appreciate the great authors of Latin literature. The same is true for the aforementioned mokkan from Japan – and this parallel becomes particularly interesting. The text from Japan is unambiguously non-religious: it is simple and straightforward, it addresses the workforce of the site, and it gives a straightforward message (which is more than what one can say for the convoluted text from Solin/Salona, for example).

The Roman world, too, had such simple instructions to those who were potentially ready to foul the cityscape – and the walls of the Campanian settlement of Pompeii preserved multiple examples. Only very few of them are as complex as the one from Solin/Salona – such as the following jokey-obscene one, a poem, that, in rather remarkable Latin, purports to come from a tomb (but was actually discovered at a doorway of a house).

Hospes adhuc tumuli ni meias ossa prec[antur] | nam si uis (h)uic gratior esse caca | Vrticae monumenta uides discede cacator | non est hic tutum culu(m) aperire tibi (‘Stranger, my bones beg you not to pee at my tomb: if you want to do the deceased an even bigger favour: take a dump! You see the tomb of Urtica [= ‘Stinging Nettle’]: go away, shitter! It is not safe for you to open your buttocks here!’).

The same playfully obscene idea of rather intimate punishments for fouling exists in literary texts, e. g. in Martial and the Carmina Priapea.

What is interesting is that occasionally such texts (just like those against loiterers) were occasionally accompanied by visual representations of serpents and snakes (cf. CIL IV 6641 for an example to do with defecation near a street shrine). Persius, Satires 1.112-4, who mentions this practice,  seems to imply that the representation of snakes creates a sacred space – perfectly possible, but surely not the first thought and immediate association of those who behold the image (or the text and the threats they contain).

Even a simple sign – like one that says ‘do not urinate here’ – can become something complex, once it encounters the largely humour-free brain of a German philologist. It raises a number of questions, in fact, and the comparison of such signs, across languages and cultures, helps to address these to an extent:

These musings raise another issue: how do texts that address a general public and wish to express a directive, in no uncertain terms, phrase this matter? Are there general politeness rules that apply? Is linguistic politeness in these matters something useful or ultimately something counterproductive?

1 Response to Digesting Food for Thought