Misappropriation and Misapprehension: Vergil on 9/11 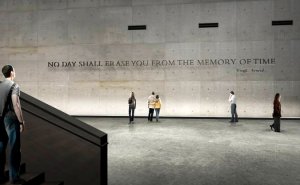 Memorials are difficult: what do we wish to remember, and how, and why? This becomes all the more apparent, the more prominent and the more emotive a monument is in its context.

Recently, there has been some (renewed) debate over the use of a quotation from Vergil’s Aeneid (Aen. 9.447) for the  9/11 memorial in New York.

The memorial, the critics say, allegedly ‘misuses a passage’ by removing it from its original context – commemorating the death of friends rather than mourning randomly inflicted carnage.

In the line’s original context, the poet celebrates his poetic prowess that will result in eternal memory of Nisus and Euryalus, two valiant Trojan warriors, who were close friends (with clear homoerotic undertones in the narrative).

Happy pair! If my poetry has the power,
while the House of Aeneas lives beside the Capitol’s
immobile stone, and a Roman leader rules the Empire,
no day will raze you from time’s memory.

Line 447 (nulla dies umquam memori vos eximet aevo), rendered ‘no day shall erase you from the memory of time’ in the memorial’s inscription, invokes Euryalus’ own words, some two-hundred lines earlier (Aen. 9.281-3):

(…) No day will ever find me separated from such
bold action: inasmuch as fortune proves kind
and not cruel. (…)

At any rate, Vergil’s line (as is true for many lines of many of the classical poets) appears to have become somewhat iconic already in antiquity – one can find it, for example, almost verbatim, in a funerary poem from the City of Rome (CIL VI 25427 = CLE 1142, final lines):

Happy pair, if there is something to that glory of death,
as their tomb had united them like a bedchamber.

One may, of course, wonder if it is a case of ‘misappropriation’ of Vergil’s lines that happens in the 9/11 memorial – as opposed to that Roman tombstone, where the setting is not altogether dissimilar to that in the Aeneid.

Before one jumps to bold conclusions, however, one should be mindful of the fact that Vergil himself was one of the keenest promoters of such forms of ‘misappropriations’, except that in his case we tend to think of artistic borrowings.

The line in question, as used in the 9/11 memorial, is an example of that. Some five years before Vergil died (and left an unfinished Aeneid to be burnt by the Emperor Augustus), Propertius had written the exact same thing – at Elegies 3.2.25-6, which in turn is a reference to Horace’s famous Ode 3.30 monumentum exegi aere perennius (translation from here):

Happy the girl, who’s famed in my book! My poems are so many records of your beauty. The Pyramids reared to the stars, at such expense; Jupiter’s shrine at Elis that echoes heaven; the precious wealth of the tomb of Mausolos; not one can escape that final state of death. Their beauty is taken, by fire, by rain, by the thud of the years: ruined; their weight all overthrown. But the name I’ve earned, with my wit, will not be razed by time: Mind stands firm, a deathless ornament.

Be that as it may.

Vergil’s line, borrowed by those who designed the 9/11 monument, has a history in the context of funerary commemoration – both in literary imagination and in real life (and death), and its context reminds us that there are things more lasting than any built structure ever will be (with the possible exception of the Egyptian pyramids): poetry.

This may not be such a bad thing to remember.

Whether this is what we were supposed to remember, as intended by those who used the line, is a different matter, of course.