Reading’s magnificent Saint Laurence church houses many a Latin inscription, some of which date back as far as the late medieval period. 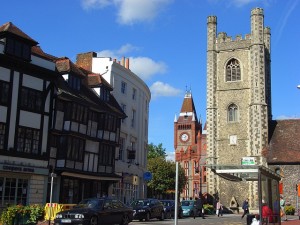 Among these treasures, there is a remarkable funerary monument, dedicated to one Martha Hamley: 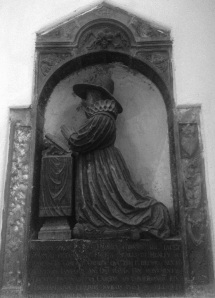 The monument displays a figure, female, wearing hat and ruff while kneeling at a bench (of the prie-dieu type). Below the central sculpture, one reads the following inscription:

Martha, the wife of Charles Hamley of Cornwall, lies buried here. She was the daughter of Thomas Seakes of Henley-upon-Thames in Oxfordshire, who died on the sixteenth day of the month of January, AD 1636. This monument was erected by her husband Charles to preserve the memory of her, who did not leave behind any children, but particularly as a testimonial to his extraordinary affection.

Written in or around 1636 – Charles I. was king of England, the University of Oxford was given a Great Charter, granting it the right to print ‘all manner of books’, and Europe was in the middle of the Thirty Years’ War  –, Martha’s inscription, like many others, talks about the deceased just as much as about those who were left behind.

The inscription claims to have been set up to commemorate Martha; yet, one does not actually learn much about her, apart from her name, the names of her father and her husband, the childlessness of their marriage, and the claim that she was loved by her husband.

As is known from other documents, Martha’s father, Thomas Seakes, was an apothecary in Henley-on-Thames. Her husband, Charles Hamley (from Kent), in records of the Corporation, is referred to as ‘Mr Saunders’s man’, which, in turn, appears to be a reference to one John Saunders, an influential man in politics at the time.

The way in which the text presents this matter, when taken in conjunction with the sculpture of a pious lady, could lead to believe that the couple’s childlessness was a major issue during their lifetime and for their relationship – those who are well-versed in Latin inscriptions may recall the presentation of the same issue in the so-called Laudatio Turiae, for example. 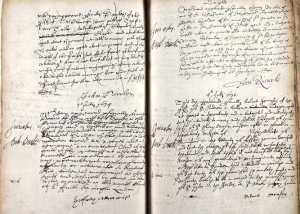 In actual fact, however, the inscription does not say so – and further research shows that one must be extremely cautious with such far-reaching conclusions. As becomes clear very quickly, the reason for their childlessness (most likely) was that Martha either died too young or – again, a wild claim, rooted in the fact that children are mentioned at all – in childbirth.

How does one know?

Archival research reveals: Martha Seakes married Charles Hamley in mid 1634, only about a year and a half before she died. Their marriage allegation (of 30 July 1634) is kept in the Marriage Bonds and Allegations records in the London Metropolitan Archives.

The text suggests that Martha was 22 years old at the time. Her spouse, in turn, was already 31. If this is correct, one can infer that when Martha died in January 1636, she was at the age of 23 or 24.

In that regard, one must take the text for what it says: the monument has been designed to extend the memory of Martha Hamley (née Seakes), taking on what (according to the frame of mind of this text, anyway) would have been her progeny’s task: to testify to their mother’s virtues and achievements.

So far, the monument has made a good job of it.