Looking at War with Lucretius

The last few weeks and months saw the emergence of numerous new (and old) centres of conflict around the globe: Ukraine, Iraq, Israel and Palestine, and Syria are the most prominent regions that attracted, or continue to attract, attention of the media. Clearly, we continue to ‘live in a world that has walls, and those walls have to be guarded by men with guns’ so that at least some may sleep peacefully under that soothing ‘blanket of freedom’ provided by men (and women) in arms, provided by means whose nature one, more often than not, desires to ignore:

The extent of pain, misery, and destruction that armed conflicts bring about has not changed fundamentally over centuries. Yes, the pace of events may have accelerated, yes, weapons now are outrageously more efficient at killing people, yes, warfare seems to have become increasingly depersonalised at the inflicting end.

Or so it feels.

The Roman Epicurean poet Lucretius, in the fifth book of his didactic poem De rerum natura (‘On the nature of things’), however, shows how this feeling is not a new one. In the following passage he provides a narrative of what essentially is a prototype of the very same sensation (Lucr. 5.1281–1307):

The beautiful, if rather archaic-sounding translation of  W. E. Leonard renders this passage as follows:

Now, Memmius,
How nature of iron discovered was, thou mayst
Of thine own self divine. Man’s ancient arms
Were hands, and nails and teeth, stones too and boughs-
Breakage of forest trees- and flame and fire,
As soon as known. Thereafter force of iron
And copper discovered was; and copper’s use
Was known ere iron’s, since more tractable
Its nature is and its abundance more.
With copper men to work the soil began,
With copper to rouse the hurly waves of war,
To straw the monstrous wounds, and seize away
Another’s flocks and fields. For unto them,
Thus armed, all things naked of defence
Readily yielded. Then by slow degrees
The sword of iron succeeded, and the shape
Of brazen sickle into scorn was turned:
With iron to cleave the soil of earth they ‘gan,
And the contentions of uncertain war
Were rendered equal.
And, lo, man was wont
Armed to mount upon the ribs of horse
And guide him with the rein, and play about
With right hand free, oft times before he tried
Perils of war in yoked chariot;
And yoked pairs abreast came earlier
Than yokes of four, or scythed chariots
Whereinto clomb the men-at-arms. And next
The Punic folk did train the elephants-
Those curst Lucanian oxen, hideous,
The serpent-handed, with turrets on their bulks-
To dure the wounds of war and panic-strike
The mighty troops of Mars. Thus Discord sad
Begat the one Thing after other, to be
The terror of the nations under arms,
And day by day to horrors of old war
She added an increase.

Yet, neither the composition of the victims nor their trauma nor their suffering has changed fundamentally – even if the discourse about the impact of war and trauma on people certainly has:

One aspect about war and armed conflict more generally that would appear to be changing rather significantly at present, however, is the way in which one gets to look at these goings-on, especially when not immediately and directly involved in, or affected by, combat action oneself. 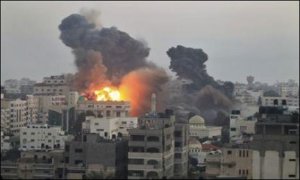 What used to be hidden away, glossed over, censored, or redacted beyond recognition in broadcast and print media, now comes as a never-ending stream of footage, supplemented with a plethora of diverse, often conflicting explanations and interpretations of the visible (as well as a deeply problematic number of images of highly questionable authenticity).

Undiluted (if hardly unbiased) supply of raw images – graphic and shocking, but still only providing a very superficial idea of the depth of that abyss that is the human psyche – is of a nature that has the potential to initiate and to carry mass movements, online and elsewhere, that official outlets and state propaganda are anxious to suppress.

One may be tempted to think of this (comparatively new) supply of raw images as a way of making combat and fighting action more immediate to those who are not directly involved in it. Yet, however immediate and unimpeded the gaze since has become, the actual distance of the onlooker from the scene of events has not shrunk.

This may be an important factor, however, as Lucretius suggests that it may in fact be the actual distance that makes all the difference (Lucr. 2.323–332):

Again, when mighty legions, marching round,
Fill all the quarters of the plains below,
Rousing a mimic warfare, there the sheen
Shoots up the sky, and all the fields about
Glitter with brass, and from beneath, a sound
Goes forth from feet of stalwart soldiery,
And mountain walls, smote by the shouting, send
The voices onward to the stars of heaven,
And hither and thither darts the cavalry,
And of a sudden down the midmost fields
Charges with onset stout enough to rock
The solid earth: and yet some post there is
Up the high mountains, viewed from which they seem
To stand- a gleam at rest along the plains.

It may be shocking to many to see actual killings and mutilations of humans: real humans, not their representations in paintings, novels, or films – imaginations that will pass without consequence.

Yet, there remains to be an innate mechanism of distancing and dissociating oneself from what one can see.

For one thing, exposure to such footage, however graphic, does not get us involved in a more direct way. If anything, it does provide us with rather better seats in the war theatre, seats with a better view of the stage – and that does change and supplement the impressions one gets, making it harder, if not impossible, to ignore what one may wish to forget. In that regard, footage hardly ever provides information that is fundamentally new or unexpected: it illustrates, supplements, and confirms existing fears and suspicions, and it may thus provide a different angle on pre-existing knowledge of a distant beholder.

How should the onlooker respond? How is one supposed to react? How is this supposed to make one feel?

Should one just, romantically, hope for love to prevail over war and hatred, as Lucretius imagined at the opening of the first book (Lucr. 1.29–40)?

Lull to a timely rest
O’er sea and land the savage works of war,
For thou alone hast power with public peace
To aid mortality; since he who rules
The savage works of battle, puissant Mars,
How often to thy bosom flings his strength
O’ermastered by the eternal wound of love-
And there, with eyes and full throat backward thrown,
Gazing, my Goddess, open-mouthed at thee,
Pastures on love his greedy sight, his breath
Hanging upon thy lips. Him thus reclined
Fill with thy holy body, round, above!
Pour from those lips soft syllables to win
Peace for the Romans, glorious Lady, peace!

Do graphic images and films trigger curiosity, revulsion, outrage? All of the above, or something else entirely? Does they result in people and governments taking action, or does it increase the feelings of help- and powerlessness?

Different people may have different answers to that question.

A particularly remarkable view on this matter has been offered by Lucretius at the opening of the second book of his De natura rerum  (Lucr. 2.1–13):

‘Tis sweet, when, down the mighty main, the winds
Roll up its waste of waters, from the land
To watch another’s labouring anguish far,
Not that we joyously delight that man
Should thus be smitten, but because ’tis sweet
To mark what evils we ourselves be spared;
‘Tis sweet, again, to view the mighty strife
Of armies embattled yonder o’er the plains,
Ourselves no sharers in the peril; but naught
There is more goodly than to hold the high
Serene plateaus, well fortressed by the wise,
Whence thou may’st look below on other men
And see them ev’rywhere wand’ring, all dispersed
In their lone seeking for the road of life;
Rivals in genius, or emulous in rank,
Pressing through days and nights with hugest toil
For summits of power and mastery of the world.

Lucretius outlines two steps of distancing oneself from encountering evil, death, and destruction, steps that he describes as suave (‘sweet, pleasant’) and dulcius (‘even sweeter’).

The first, more immediate response is joy – the joy of not being affected oneself. This is pure, egotistical mode, explicitly not an expression of Schadenfreude.

The second step is the delight of inhabiting edita doctrina sapientum templa serena, the proverbial ivory towers, from where they can see other people struggling with problems that they (think they) have long solved for themselves.

One such insight, straight from the ivory towers, might be the relativism behind a statement in the first book of the De rerum natura, in which Lucretius points out that, unlike certain innate qualities to the elements, which are permanent in nature, the human condition is not permanent (Lucr. 1. 455–8):

But state of slavery, pauperhood, and wealth,
Freedom, and war, and concord, and all else
Which come and go whilst nature stands the same,
We’re wont, and rightly, to call accidents.

Is there any consolation in the (true) observation that none of the above will last forever? Can there be, except for those who are not directly affected by all of this?

It seems hard to imagine.

Yet one must wish for those who are in control to find the tranquillity of Epicurean ataraxia that Lucretius advocates, to break the cycle of violence, greed, claims to domination, and revenge eventually, joining those who –

… hold the high
Serene plateaus, well fortressed by the wise,
Whence thou may’st look below on other men
And see them ev’rywhere wand’ring, all dispersed
In their lone seeking for the road of life;
Rivals in genius, or emulous in rank,
Pressing through days and nights with hugest toil
For summits of power and mastery of the world.