Posted on December 13, 2014 by Peter Kruschwitz

Pope Damasus I (b. 305-ish, d. 385) was keen to promote veneration for the martyrs of the early Christian church. In order to achieve this he, among other things, composed epigrams, e. g. to decorate the burial spots of those who had suffered for their beliefs.

Revolted by the passages that have emerged from the Senate intelligence committee’s report on CIA torture as well as disgusted by my lack of actual surprise at what has emerged (what do we think the CIA and similar services do in their day job?), I would like to recall one of Damasus’ epigrams.

Stripes, executioners, fire, torture, chains:
St. Lawrence’s faith alone managed to overcome all that.
Damasus, suppliant, loads these altars with gifts,
looking up to the merit of this outstanding martyr. 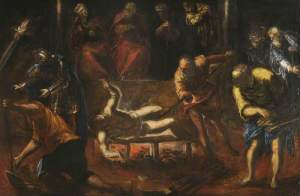 St. Lawrence (d. 258) was archdeacon of Rome and responsible for a good deal of money of the Christian community (including its spend among the poor in the form of alms). He was tortured and executed for his unwillingness to hand over these means to Rome’s authorities.

Or as we, in our (post-)Christian righteousness, would presumably call it: a second-in-command and terror financier.

Nowadays, churches are named after St. Lawrence. Nowadays, his sufferings are celebrated as martyrdom. Nowadays, our society allows its henchmen (and -women) to administer torture, while we allow ourselves to detest it publicly with grandstand gestures.

How will a future Damasus judge us, and what will he have to say about the victims of torture?

Incidentally, the actual Damasus knew where to find his words: in pagan literature, in Lucretius‘ third book of the De rerum natura (note the verbatim allusion in line 1017 – translation taken from here):

Cerberus and Furies, and that Lack of Light
Tartarus, out-belching from his mouth the surge
Of horrible heat- the which are nowhere, nor
Indeed can be: but in this life is fear
Of retributions just and expiations
For evil acts: the dungeon and the leap
From that dread rock of infamy, the stripes,
The executioners, the oaken rack,
The iron plates, bitumen, and the torch.
And even though these are absent, yet the mind,
With a fore-fearing conscience, plies its goads
And burns beneath the lash, nor sees meanwhile
What terminus of ills, what end of pine
Can ever be, and feareth lest the same
But grow more heavy after death. Of truth,
The life of fools is Acheron on earth.

Damasus took the opening of his poem from Lucretius’ description of how the unenlightened imagine and dread the underworld, with all its pains, thus turning the executioners into quasi-devils.

According to Lucretius, there is no such underworld: the life of fools is Acheron on earth.

But there may well be devils living on earth.