Posted on February 8, 2015 by Peter Kruschwitz

There are creatures so bizarrely beautiful and so beautifully bizarre, it seems impossible to imagine a world without them.

Unicorns. Kangaroos. Highland coos. Hedgehogs. And, of course, the seahorse. (Not to mention the fabled sea-unicorn!)

The mesmerizing, almost mythical seahorse has inspired the fantasy of poets throughout the ages.

Roman poets of the Republican and Augustan periods, like others before and after them, imagined the seahorse as an animal that was given the honour to serve the sea-gods – just like dolphins. 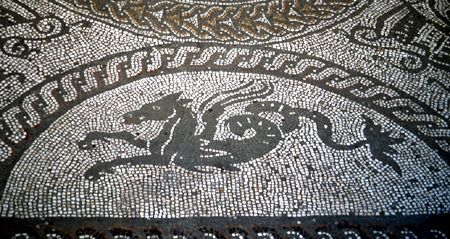 Thus the seahorse features in a fragment of the perplexing lyrical poet Laevius, who in his fragmentary poem Sirenocirce (Laevius, frg. 24 Bl.) allowed the sea-gods to ride –

in vehicles girded with a dolphin
and rugged seahorses.

A seer, Proteus, lives in Neptune’s Carpathian waters,
who, sea-green, travels the vast ocean in a chariot
drawn by fishes and two-footed horses.
Even now he’s revisiting the harbours of Thessaly,
and his native Pallene. We nymphs venerate him,
and aged Nereus himself: since the seer knows all things,
what is, what has been, what is soon about to be:
since it’s seen by Neptune, whose monstrous sea-cows
and ugly seals he grazes in the deep.

Similarly, we find them in the poem Ciris, in the so-called Appendix Vergiliana (Ciris 391–399, transl. H. R. Fairclough):

Many Nymphs marvel  at her amid the waves; father Neptune marvels, and shining Tethys, and Galatea, carrying off in her company her eager sisters. At her, too, marvels she who traverses the mighty main in her azure car, drawn by her team of fishes and
two-footed steeds, Leucothea, and little Palaemon with his goddess mother. At her, too, marvel they who live by lot alternate days, the dear offspring of Jupiter, mighty seed of a Jupiter to be, the Tyndaridae, who marvel at the maiden’s snowy limbs.

News reported that seahorses have now virtually disappeared from Studland Bay, Dorset, and the Isle of Wight, a result of excessive boat anchors and illegal moorings as well as recent decisions to formalise such arrangements.

Hopefully it’s not too late quite yet to do something about this – and to show consideration for those animals that, once upon a time, lent their mythical horsepower to the sea-gods.