Latin Poetry and the Limits of Roman Medicine

There is a notorious passage in Plutarch‘s Life of Cato the Elder (23.3-4), in which the Greek philosopher denounces the infamous censor‘s view on Greek medicine:

It was not only Greek philosophers that he hated, but he was also suspicious of Greeks who practised medicine at Rome. He had heard, it would seem, of Hippocrates’ reply when the Great King of Persia consulted him, with the promise of a fee of many talents, namely, that he would never put his skill at the service of Barbarians who were enemies of Greece. He said all Greek physicians had taken a similar oath, and urged his son to beware of them all.

There is, in theory, little point in engaging with this text in great depth. It has been shown with meticulous care by Vivian Nutton (with a focus on Roman medicine), Erich S. Gruen (more generally), and several others that most anti-Greek statements ascribed to Cato are not the result of an actual dislike or hatred of all matters Greek.

Much rather, they are the result of a carefully calculated campaign to (re-)invent Roman national identity at a time in the second century B. C. when the composition, nature, and dynamics of the Roman empire had fundamentally changed and the concept of ‘Romanness’ (at least by some) was felt to require re-defining as well as re-assertion.

What reminded me of this passage, however, were a number of inscribed Latin poems of the imperial age (and their role in relevant scholarship), addressing the interference of proponents of the medical profession with their patients … from the patients’ perspective (or rather the perspective of those left behind).

It all started with an inscription that I was lucky enough to see in person during my recent research trip to Tarragona – an inscription for a charioteer called Eutyches, which is now kept in Tarragona’s wonderful Museu Diocesà (sala I): 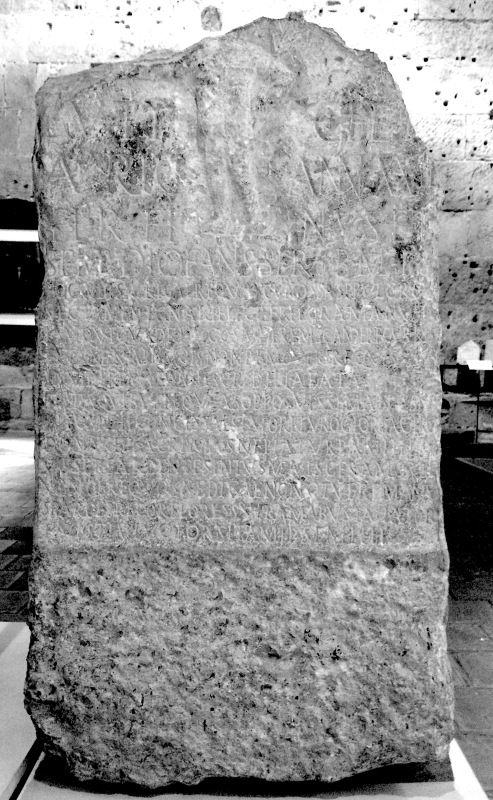 For Eutyches, the charioteer, aged 22: Flavius Rufinus and Sempronia Diofanis had this made for their well-deserving slave.

In this sepulchre rest the bones of a rough charioteer, who knew very well how to handle the reins with his hand: I would dare to climb into the chariots drawn by four horses, and yet I would not remove myself from mere pairs of horses. The cruel Fates envied my (youthful) years, those Fates, to whom you cannot counterpose your hands. I was denied the glory of dying in the circus, lest the faithful crowd honoured me with tears: blazing illnesses burnt my bowels, illnesses that medical hands [or, if rather less likely: the hands of the female doctor] were unable to overcome.

I beg you, wayfarer, spread flowers over my tomb: perhaps you have favoured me (in the same way) when I was still alive.

The reason why I wanted to inspect this piece in Tarragona originally was not medical (although it is hard to avoid autopsy-related puns in this context): I wanted to get a clear idea of the text-image interaction in this piece – the victorious charioteer depicted centrally on this stone, referred to in the text as mea busta, which draws the reader to the text – into a text that attracts with large letters at the opening prose part and then becomes rather more personal in its poetic part (which is written in smaller letters).

But, as often in my research, I got sidetracked by seemingly minor things – in this case: the mention of the doctor’s inability to help with Eutyches’ inflamation of his bowels.

A defeat for the doctor and patient alike (note the use of vincere … non potuere in conjunction with a mention of the ‘hands’, as Eutyches’ own hands, skillful by contrast, had been mentioned before).

A sad turn of events for Eutyches and his owners – and a rather moderate way of deploring the limits of medical support within the context of the Latin verse inscriptions.

Coming from a literary (rather than an epigraphical) perspective, there is a view that doctors and medical personnel in general, if not the subject of mourning themselves, tend to get a rough deal in Latin epigrams (see e. g. Schatzmann’s comment on scoptic epigrams here [text in German]).

This view is furthered by sentiments such as the elder Pliny’s famous comment referring to medical doctors’ inability to agree on a diagnosis  (Plin. nat. 29.11):

Hence that inscription on a monument for a poor sod: ‘he died of an overdose of doctors’.

When looking at actual inscriptions that commonly get mentioned in this context, however, it turns out that things are not at all as straightforward as they would appear and that the actual picture is a lot more nuanced than commonly believed.

My parents used to call me Felix (‘Lucky’) by name, medicine was given to me as my life here. I was able to ease the arduous pains of many: I did not manage to overcome my own illness with my skill.

For Euhelpistus, freedman. He and his spirits lived 27 years, 4 months, 11 days.

A sudden death snatched away from him the prime of his life: a most innocent soul! Doctors cut him and killed him.

Publius Aelius Peculiaris, freedman of the emperor, for his foster son.

I, Flavius Maximinus, shield-maker, senator, have erected a statue for my son Octemus. He lived 5 years, 15 days. (With his life) severed by a doctor, he is buried here among the martyrs.

But not all cases (and not even the majority of them) are as straightforward and vindictive as these – and that is true even for texts, which very frequently have been used as evidence for the opposing view.

A notorious piece that gets mentioned frequently in that regard is the epigram for Ephesia Rufria (again) from the city of Rome.

Inspection of the text in full (and not just, as is common, as an isolated half-sentence) shows a remarkably restrained expression of disappointment in this poem  (CIL VI 25580 cf. p. 3532 = CLE 94; image available here):

Here rests Ephesia Rufria, a mother and good wife, who died of a bad fever, which doctors had caused unexpectedly. This is solace, not a true expression of an alleged crime: I believe that a woman as sweet as this had to die because she was deemed worthier of congress with the gods.

Similar frustration has been expressed in the following piece from Augusta Rauricorum/Augst (Germania superior) (AE 1952.16 = Zarker no. 68):

I would lament the lamentable guilt of the doctor forever, if it weren’t for the fact that even kings got snatched away to the underworld. As wife, I left behind a father and husband at the same time, who deserves expressions of sorrow, devoid of a consort in the marital chamber.

To the Spirits of the Departed. Gaius Dignius Secundianus, Raetian by origin, had this made for himself while still alive as well as for Aurelia Deccia, his wife, a most dutiful citizen, and a most unique and chaste woman, whose death I mourn in pain to have happened in my absence and due to the fault of those who looked after her. She lived 28 years, 10 months, and 23 days. Also for Gaius Dignius Decoratus, my son. He lived (at least 2) years, 9 months, and 17 days. Also for Dignia Decorata and Aurelia Secundina, my daughters (while still alive). Augustalis of the municipium Brigetio.

It has commonly been assumed that the culpa curantium, the ‘fault of those who looked after her’ to which the inscription alludes, refers to medical personnel – but one must note that the text is anything but explicit about this!

An even more bizarre case can be seen in a rather obscure, partly dialogical inscription, again from the city of Rome. The text, written in hexameters (with a single pentameter as its second line), is commonplace in footnotes about dismissive remarks about doctors in the Roman world – but it is hardly ever quoted in full (CIL VI 30112 cf. p. 3736 = CLE 543 cf. p. 856; for an image click here) :

– ‘What good was it for you to have lived a strict life for so many years? The heirs’ account itself tells you!

‘The first fight, solved in accordance with the law, was that about the 5% inheritance tax. Then, there were boorish people delaying matters in manifold ways by their stalling affairs at the treasury: but you keep yourself busy with this matter under a just judge, not just once and for all, but also with long delays due to the craftiness of those rogues.’

– ‘But I won, master! As, half-dead, I lay prostrate, having acquired the palm of victory, the doctors amputated the limbs of my body in an evil fashion!’

– ‘A last respect, I gladly built the tomb for you: you did not ask me to, but you used to desire it many a time when you were still alive.’

The text would indeed appear to talk about doctors, vultures, and body strippers – but it is not at all clear that it refers to actual doctors performing actual amputations.

In fact, considering the general line of thought in this poem, it would appear to mean something else entirely: a client who has died gets honoured by his patron (dominus, ‘master’), who addresses the deceased: his strict, frugal style of life turned out to be nothing but self-punishment, as, after his death, the heirs started to fight.

Following taxation and some drawn-out administrative process (the wording is not entirely clear, but would appear to refer to the Roman treasury housed in the temple of Saturn), legal battles ensued.

The text then allows the deceased to speak, who – in the fashion of a victorious, but heavily wounded gladiator – says that he won after all, even if it came at a horrendous cost (the term Pyrrhic victory springs to mind). This, one could argue, might refer to the final settlement, tearing up the inheritance and leaving the original body heavily mutilated (invoking an evil doctor imagery, without referring to actual mutilation).

The final movement, re-introducing the patron as its speaker, then offers relief, suggesting that the master, with a grand gesture, at least managed to fulfill the deceased’s will and provided a tomb for him.

Heart-balm for the anonymous deceased after all – just like the following person is described to have acted in real life according to an inscription from Capua (CIL X 4494 = CLE 1360 = ILCV 3375):

We mourn Fabea Scerniola, always beloved by us, a delight for the old and medicine for the sad. We have faith that you live forever in Christ, as it is certain that you have thus escaped the evils in hell.

She lived approximately 14 years and was buried on 29 April under the consulship of Probinus, vir clarissimus.

Also from a Christian context – in fact, from St. Peter in the Vatican, where the following text is reported to have been inscribed with an effigy of Constantine – comes the final piece, which suggests that, in this case, all human medicine proved useless and counterproductive (CLE 901 = ICUR II 4123 = ILCV 3480):

Have faith that the ashes that are to live, when the soul goes back (to heaven), may come back again to the light they have lost. For the wandering moon had already completed ten orbits, when salvation gave me a nod as death was looming. Useless medicine had increased my lethal pains, and my illness had grown under the influence of human craft. Oh what honour Christ bestowed upon Peter: the former gave me life, and the latter brought it back to me.

Snide remarks, directed at the skills of medical professionals (especially if related to invasive and amputative surgery), have a long tradition and are motivated by a wide range of reasons – before and after the Elder Cato.

The imagery of this line of thought has become topical.

Overall, however, in the Latin verse inscriptions – just like in the initial case of the charioteer from Tarragona – equanimity and stoic composure appear to have prevailed in the face of ancient medicine and its obvious and well-known limits.