Every Dog Has His Day

I am a hypocrite. I enjoy eating meat, even though I know about the way it is ‘produced’ (a sterile, technical term, to disguise the suffering and killing of animals, which have been bred under horrendous conditions, drugged, and tortured before they end up on my plate), even though I know about the disastrous impact that our current irresponsible level of meat consumption has on the environment, climate, and world hunger.

I am a hypocrite. I show few signs of distress over the living and dying conditions of animals that are bred for consumption in my own culture. I treat them as if they are no living beings, but things, man-made, without a soul, without a life that is worth preserving. But woe betide anyone who mistreats cute, adorable animals – dogs, cats, birds, fluffy woodland creatures…!

I am a hypocrite, and Homer Simpson seems to sum up my frame of mind perfectly in Lisa the Vegetarian: “Lisa, get a hold of yourself. This is lamb, not a lamb.”

Screenshot from The Simpsons (‘Lisa the Vegetarian’).

In fact, I am a hypocrite to such an extent that I seem to be able to subscribe to a view that certain forms of killing are ‘more humane’ to animals than others, depending on the level of animal suffering that is involved to end a life: at least kill them quick and as painlessly as possible – a bit like George Carlin’s re-written commandment ‘thou shalt try real hard not to kill anyone.’

These days, I feel agitated by the news about the imminent Yulin Dog Meat Festival (listed under ‘tourism’ on Wikipedia!), which has attracted significant coverage in the media and (perfectly well deserved) outrage in social media, amplified by the involvement of TV celebrities (among others).

I know that what I see is horrible and wrong and must be stopped.

But do I have a right to complain, being such a hypocrite myself? Shouldn’t I put my own house in order first? Would there be a similar outrage, if the cruel execution of animals just went on behind closed doors, like it does for the animals that I eat myself, virtually every day?

I am at a loss, and even turning to the ancient Romans, as I often do, does not give me much joy: they too celebrated the public wounding and killing of animals for spectacle, entertainment, and pleasure.

I derive a little comfort, however, from the fact that, at least sometimes, Romans (like other civilisations of the ancient Mediterranean and elsewhere) celebrated their animals as companions in life and death, from Catullus’ famous sparrow poem to Martial’s slightly lesser known poem for a dog called Issa (Mart. 1.109, translation from here):

Issa is more playful than the sparrow of Catullus. Issa is more pure than the kiss of a dove. Issa is more loving than any maiden. Issa is dearer than Indian gems. The little dog Issa is the pet of Publius. If she complains, you will think she speaks. She feels both the sorrow and the gladness of her master. She lies reclined upon his neck, and sleeps, so that not a respiration is heard from her. And, however pressed, she has never sullied the coverlet with a single spot; but rouses her master with a gentle touch of her foot, and begs to be set down from the bed and relieved. Such modesty resides in this chaste little animal; she knows not the pleasures of love; nor do we find a mate worthy of so tender a damsel. That her last hour may not carry her off wholly, Publius has her limned in a picture, in which you will see an Issa so like, that not even herself is so like herself. In a word, place Issa and the picture side by side, and you will imagine either both real, or both painted.

Not everything is terrible everywhere all the time!

Inscription for Helena (CIL VI 19190) with dog relief (but probably not for a dog called Helena). – Image source here.

So, in honour of all the dogs that will needlessly suffer and die in Yulin this year so that humans may rejoice, I offer my readers a little ancient Roman dog cemetery (to which one may add Margarita, the lap-dog, about whom I have written before): 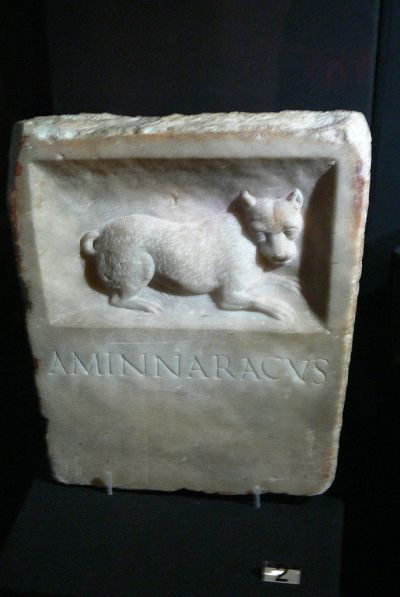 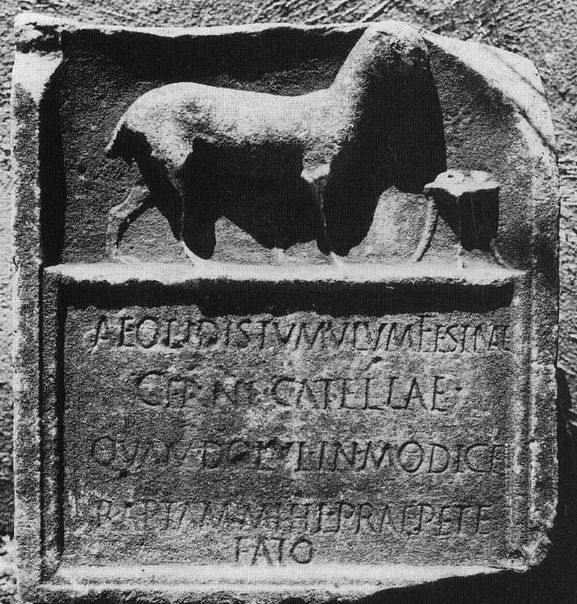 Behold the tomb of Aeolis, the cheerful little dog, whose loss to fleeting fate pained me beyond measure.

In this place lies a little dog after an accomplished life, and sweet honey covers his body [sc. to preserve it?]. His name was Fuscus, and he was eighteen years old. Barely could he move his limbs in his old age . . .

This guard of the coaches never barked unsuitably. Now he is silent and his shade protects his ashes.

How sweet and friendly she was! While she was alive she used to lie in the lap, always sharing sleep and bed. What a shame, Midge, that you have died! You would only bark if some rival took the liberty of lying up against your mistress. What a shame, Midge, that you have died! The depths of the grave now hold you and you know nothing about it. You cannot go wild nor jump on me, and you do not bare your teeth at me with bites that do not hurt.

Bedewed with tears I have carried you, our little dog, as in happier circumstances I did fifteen years ago. So now, Patrice, you will no longer give me a thousand kisses, nor will you be able to lie affectionately round my neck. You were a good dog, and in sorrow I have placed you in a marble tomb, and I have united you forever to myself when I die. You readily matched a human with your clever ways; alas, what a pet we have lost! You, sweet Patrice, were in the habit of joining us at table and fawningly asking for food in our lap, you were accustomed to lick with your gready tongue the cup which my hands often held for you and regularly to welcome your tired master with wagging tail . . . . . .

8 Responses to Every Dog Has His Day