Posted on December 31, 2015 by Peter Kruschwitz 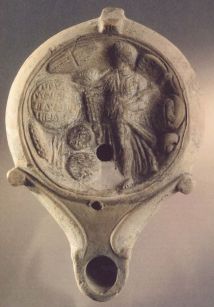 An auspicious day, the Romans marked New Year’s Day with religious ceremonies and sacrifice (as T. Vindol. II 265, a letter from Vindolanda, illustrates, for example), but also with notes (see, e. g., T. Vindol. II 261, another letter from Vindolanda), exchanging all kinds of little trinkets and foodstuffs, and quite possibly even cakes that wished others a ‘prosperous, well-omened new year’: annum novum faustum felicem.

But for Caelius Donatus, this one particular New Year’s Day (unfortunately, we cannot know the exact year) was more than that: it was supposed to be extra special!

A father of two sons and one daughter, Caelius Donatus had been elected chief magistrate of his local council, with oversight of local finance.

Many Roman offices were taken up on March 1st; but several communities introduced their new magistrates on January 1st, including that of Caelius Donatus.

The first of January therefore was the very day for him on which he finally could put on and boast the toga praetexta – the garment that distinguished him as a magistrate.

His family, his wife and his three children: they all must have been proud of him, his great achievement, and the prestige that came with it.

(i) As you pass by, please stay a little, wayfarer, and read what you will not be able to read out without crying.

(ii) For here, buried in this little plot, I lie, most ill-omened, born of a father who was duovir with oversight of financial affairs.

(iii) He was not allowed to see his father wearing the toga praetexta except for that one day on the first of January.

(iv) Subsequently, I was bedridden, then, on the twentieth day, I had to be handed over for funeral: I lived a life of 16 years, 10 months, and 10 days, and, together with my light of life, I abandoned my mourning mother together with my dutiful sister, my brother, and my father.

Gaius Caelius Sedatus fell ill and died at the (preliminary) high point of his father’s career, and it is hard not to see the father’s barely concealed anger and disappointment that resulted from son’s premature death and the way it had blighted the beginning, if not the entirety, of a year that was supposed to be special.

He was not allowed to see his father wearing the toga praetexta except for that one day on the first of January.

The father’s feelings are deeply engrained in the text’s structure.

The text of the inscribed poem rests on three fundamental pillars, of which the passage that I just quoted is the central one: (i) the customary address of the wayfarer, (iii) the observation that the son was not allowed to admire his father’s achievements for more than just a single day (above), and then (v) the final, mostly technical statement that Caelius Donatus had this memorial made for his son Sedatus.

These elements, presented in an impersonal third-person narrative, are interspersed with two segments in which Sedatus, the deceased son himself, is imagined to act as a first-person interlocutor: (ii) Sedatus remarks that he lies ‘here’, born of a (newly) distinguished father, and then (iv) he speaks of his sudden and lethal illness, through which he had to abandon his family and leave his mother in mourning.

On two occasions the deceased’s dialogue with the memorial’s impersonal voice thus adds a personal dimension to a narrative that more than anything else celebrates father’s achievement (rather than, for example, the boy’s promising potential) – and that even commemorates the father’s name before that of his prematurely deceased son (to whom this memorial belongs).

The first time he gets to speak for himself, the son is imagined to refer to himself as infelicissimus, most ill-omened, the opposite, to an extreme, of the felicem (i. e. ‘well-omened’ ~ ‘lucky’) element in the Roman New Year’s wish annum novum faustum felicem.

One cannot help but feel that this is mostly for a rather vain reason – namely because he was unable fully to enjoy the pleasure that (to his father’s mind) one must derive from having been granted the privilege to see one’s father as a provincial magistrate.

The second time, the son is made to recapitulate the story of his illness and his premature demise, describing himself as a cause of grief and mourning for his mother most of all. It is not until it comes to the mention of his creation of a funerary monument for his son that the father speaks of his own mourning – and he is in mourning over ‘these matters’ (haec maerens) rather than over his son.

In fact, even at the point of death of his son, Gaius Caelius Donatus did not manage to put his (now tainted) achievement into perspective. Much rather, his poem utilises the deceased boy and introduces him as someone who regrets having been denied the privilege to behold the father in his political role for more than a day.

When Caelius Donatus was wished a ‘prosperous, well-omened new year’, annum novum faustum felicem, he undoubtedly (on the basis of the above inscription) saw faustitas and felicitas in material wealth, political influence, and societal standing: a common notion, well expressed in the iconography of many New Year’s trinkets, including the clay lamp (above) with its depiction of ears of grain and coins.

A stark contrast to the use of faustus and felix in Terence‘s exclamation o faustum et felicem diem, ‘oh prosperous, well-omened day!’ at Andria 956, clearly resembling the Roman New Year’s wish at the very moment when after extended family stresses harmony gets restored and new, more peaceful beginnings are finally within reach.

Through the death of his son, the infelicissimus Caelius Sedatus, Caelius Donatus had to learn the hard way: true prosperity and true good fortune do not depend on one’s professional achievements alone, and our successes are worth but little if we cannot share them with those we love and those whose opinion matters to us.

Annum novum faustum felicem vobis  – a prosperous, well-omened new year to you, not just as professionals!