The younger Seneca, in his Consolatio ad Polybium, praises Polybius for his translations of the classics: a Latin translation of Homer and a Greek translation of Vergil. Seneca writes (11.5-6):

Turn, now, to those poems which the efforts of your genius have made famous and which you have turned into prose with such skill that, though their form has disappeared, they, nevertheless, retain all their charm (for you have so performed the most difficult task of transferring them from one language to another that all their merits have followed them into the foreign speech) – take into your hands whichever of the two authors you please, and you will find that there is not a single book of their writings which does not supply numberless examples of the vicissitudes of human life, of unexpected misfortunes, and of tears that for one reason or another have been made to flow. 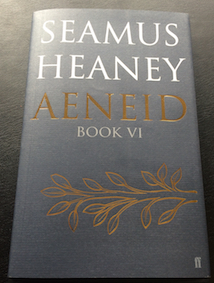 It is with those words that one ought to introduce an appreciation of a translation of the sixth book of Vergil’s Aeneid that has just been published by Faber & Faber – a translation by the recently deceased Northern Irish poet Seamus Heaney.

Unlike Polybius, Heaney has not produced a rendering of the Aeneid in prose. In that regard, the form has not ‘disappeared’ – or not altogether disappeared: Vergil’s 901 lines have become 1222 lines in Heaney’s translation – an extra 33%, owed to the fact that the conciseness and brevity of a heavily inflectional language such as Latin cannot be rendered into English.

What is Heaney’s translation of Vergil’s Aeneid, book 6, the end of Aeneas’ Odyssey and his trip to the underworld, about?

He explains in an author’s note (p. VII) that –

‘This translation of Aeneid VI is neither a ‘version’ nor a crib: it is more like classics homework, the result of a lifelong desire to honour the memory of my Latin teacher at St Columb’s College, Father Michael McGlinchey (…).’

‘Michael McGlinchey created an inner literalist who still hunts for the main verb of a sentence and still, to the best of his ability, disentangles the subordinate clauses, although usually nowadays with the help of a crib from the Loeb Library or the old Penguin Classics. Yet nowadays too that sixth form homunculus must contend with a different supervisor, a writer of verse who has things other than literal accuracy on his mind and in his ear: rhythm and metre and lineation, the voice and its pacing, the need for a diction decorous enough for Virgil but not so antique as to sound out of tune with a more contemporary idiom – all the fleeting, fitful anxieties that afflict the literary translator.’

This outlines perfectly, of course, the considerations and constraints of any translator, and particularly any translator whose aspiration lies beyond the dubious achievement of producing mere translationese.

Cicero, in his Academica (1.10), suggests that one of the decisions that a translator may have to take is that between verba (‘words’) and vis (‘force’ ~ ‘[true] meaning’), a decision between a literal translation and something that would appear to capture the essence of the text whose rendering is to be achieved.

Heaney, in his note, expresses a different take on this.

For him, it was not a choice between faithful preservation of Vergil’s very words, which one might render more or less literally, or what Vergil, in fact, may have wanted to express. For him, it was a choice between the former and something that captures the quintessential beauty of Vergil’s language, that conveys the aesthetic experience in language and rhythm – the way Heaney understood it, the way Heaney sensed and perceived it.

The result is, indeed, a work of outstanding beauty – a work that will come to perfection through the skill and art of a performer. Heaney’s Aeneid, like Vergil’s, is a work to listen to, not just a work to read. (Listen, for example, to Edna O’Brien’s wonderful reading here.)

In this, he is much closer to the original than most others who have tried before him. Powerful eloquence, condensed to its very essence, with a fine ear for the nuances, mood, and pace of Vergil’s Aeneid VI, is the hallmark of what Heaney chose to call his ‘classics homework’.

‘Unhappy Dido! So the news I got was true,
That you had left the world, had taken a sword
And bade your last farewell. Was I, O was I to blame
For your death? I swear by the stars, by the powers
Above and by any truth there may be under earth,
I embarked from your shore, my queen, unwillingly.
Orders from the gods, which compel me now
To travel among shades in this mouldering world,
This bottomless pit of night, dictated
Obedience then as well. How could I believe
My going would devastate you with such grief?
Stay a moment, don’t slip out of our sight.
Is there someone you are trying to avoid?
These words I’m saying to you are the last
Fate will permit me, ever.’

Heaney beautifully captures the poet’s meticulous care to present us with an Aeneas who, for the longest time, refuses to take ownership of his own fate and responsibility for his actions as well as the effects they have on others, and instead readily embraces any opportunity to credit divine intentions for his grandstanding and irresponsibility.

I embarked from your shore, my queen, unwillingly.

Even when confronted with the most painful result of his actions, Aeneas manages to make everything about himself, incredulously asking Dido’s eternally silent shade if it was really him who had sent her to this mouldering world, this bottomless pit of night (per loca senta situ cogunt noctemque profundam / imperiis egere suis).

Heaney’s Aeneid VI preserves what Seneca called the charm and the merits of Vergil’s masterpiece. It does not attempt to outperform Vergil, and it does not distort the original, sometimes primordial, sometimes lyrically refined aesthetic and narrative experience.

The aesthetic experience that lies in Heaney’s ‘homework’ comes at a price, however – a price that Heaney clearly was willing to pay and that may not distract the majority of his readership too much. The price is what Cicero had called the vis: torn between the need to respect Vergil’s verba and the desire to live up to his self-imposed poetic standards, Heaney does not always do justice to what Vergil, in fact, was saying.

A crucial moment in that regard (though certainly not the only one) is Anchises’ famous prophecy of Rome’s future glory.

‘(…) But you, Roman,
Remember: to you will fall the exercise of power
Over the nations, and these will be your gifts –
To impose peace and justify your sway,
Spare those you conquer, crush those who overbear.’

Apart from mere syntactical quibbles, Heaney did not really manage to capture the essential vis of these verba.

Anchises demands from Aeneas to remember the Romans’ artes (‘skills’ rather than ‘gifts’ – they are acquired abilities, not their innate ingenium) – the exercise of power and paci (or pacis) imponere morem, to impose the very character, the ethos (morem) on (or of) peace.

It would not do Heaney’s work any justice at all to blow such moments out of proportion, however. With Heaney’s Aeneid VI we have a masterpiece in our hands, a truly dignified, stunning work of art – an homage of a great poet for his predecessor, retaining all the charm and celebrating the merits of Vergil’s Aeneid in a timeless rendering that one will want to read as well as to hear being read by others.

This piece of homework may have been submitted late (something it has in common with the Aeneid itself, in fact), but it was well worth the wait.