A Chilling Letter from Ancient Rome

It has been a couple of years since I last posted a chilling Halloween story from the ancient world, and it has also been quite some time now since I last blogged: I blame a spooky-scary workload!

At any rate, time to resume blogging, time for a story worthy of the occasion. So … here it comes: a translation of the younger Pliny‘s most famous spooky letter (Plin. epist. 7.27):

Gaius Plinius to his Sura: greetings!

Leisure grants opportunity – for me to learn and for you to teach me something. For I should eagerly like to know whether you believe that ghosts exist and have a proper appearance and a spirit, or whether you think that they are a humbug and absurdities that spring from our imagination.

I do believe they exist, and I come to that conclusion primarily from what I head had happened to Curtius Rufus. When he was still insignificant and a non-entity, he had been assigned to the governor of Africa as an attaché. As the day was leaning towards its end, he took a walk in the colonnade. A woman’s shape appears to him, exceeding a human in size and beauty. He was terrified, and she tells him that she was Africa, who had come to tell him of things to come: he was to go to Rome and to hold office, and even to return to this very same province with supreme command: and there he was to die. All this became true. And there is even talk that, when he arrived at Carthage and left the boat, he encountered the same apparition on the shore. Certainly, when he had fallen ill, he provided explanations for the present on the basis of the past as well as such for future on the basis of the present, and he let go of all hope for his health – even when no one in his company was concerned for him.

But isn’t this next story, which I will tell just the way I heard it, even more dire and hardly less astonishing? There was a house in Athens, spacious and sizeable, but also with a horrendous reputation and a bringer of destruction. Through the silence of the night the clangour of iron, and if you listened more carefully, the rattling of chains resounded, at first from a distance, then coming closer. Soon after that, there was an apparition, an old man, emaciated and squalid, with a long beard and dishevelled hair. There were fetters around his feet, in his hands he held chains and shook them. This caused the inhabitants upsetting, horrifying nights through which they stayed awake in horror. Sickness followed their lack of sleep, and eventually death, as fear grew further. For even during daytime, even though the apparition had vanished, the memory of what they had seen remained in front of their eyes, and thus their dread outlasted the dread’s causes. Thus the house had become deserted and condemned to being abandoned, being left to this monstrosity altogether. Yet it was advertised, be it that someone, unaware of such evil, had any desire to buy or rent it.

The philosopher Athenodorus came to Athens. He read the advertisement, and, when he had heard about the price, he began to inquire, as the cheap price sounded suspicious to him. He found out about everything and still he was no less keen – in fact: he was rather more – to rent the place. When the evening came, he ordered for a resting place to be placed in the front part of the house. He demanded his notebooks, a stylus, and a lamp, and then sends all his servants off into the inner rooms. He himself focused his mind, eyes, and hand on writing, lest an unoccupied mind were to make up phantom noises and baseless fears. At first, as normal, there was the silence of night. Then shaking of iron, fetters being moved. He did not lift his eyes, did not let go of the stylus, but strengthened his mind and blocked his ears. Then the eerie sound grew bigger, came nearer, it already was on his doorstep, and then it was heard in his room. He turns around and sees and recognises the apparition that he was told of. It stood there and gave him a sign with its finger, as though he was summoning him. He, however, gives it a sign with its hand to wait a little and returns to his wax tablets and his stylus. The apparition sounds off its chains over the head of the man as he was writing. He turns around again and sees it summoning him as before, and without further delay he takes his lamp and follows it. It walks with slow steps, as if weighed down by chains. As it enters the house’s courtyard, it suddenly disappears and leaves its companion alone. Left alone, he plucks some weeds and leaves and places them on that very spot, as a mark. The next day, he goes to the magistrates, asks them to command for that spot to be dug up. Bones are discovered, caught and tangled up in chains, which had emerged in decay from a body, rotted away through age and soil, and been left to the chains. They pick them up and bury them publicly. Once the spirits of the departed had been buried properly, the house then was free of them. 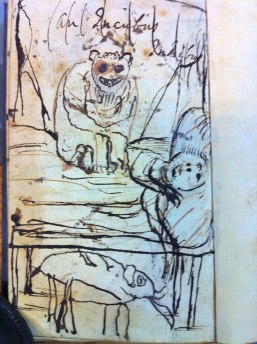 I trust those who vouch for these stories. I can guarantee others for the next one. I have a freedman, not at all uneducated. His younger brother used to sleep with him in the same bed. That man saw that someone sat on him, on the blanket, applying scissors to his head, already cutting off some hair from the top of his head. When it dawned, he was shorn around the top of his head, and hair was discovered lying around him. Only very little time elapsed, and something similar did the same again, confirming the truth in the former. A slave-boy used to sleep in the dorm with many others. Through the windows came, thus he tells, two men in white tunics and shore him as he was asleep, then they disappeared again the same way they had come. The next day revealed the boy shorn and hair strewn around him. Nothing worth noting followed, except that I was not indicted after all perhaps, which I was to be, if Domitian, under whom these things happened, had lived longer. For in his desk there was a pamphlet about me, given to him by Carus. Whence one may surmise, as people who are indicted customarily let their hair grow long, that the shorn-off hair of my folk had been a sign that the danger that was looming had been averted.

Now, apply your learnedness to these matters, I beg you. It is a worthy cause for you to study extensively and in detail, and I myself am not unworthy, surely, to receive the benefit of your learnedness. Of course, consider the positives as well as the negatives, as you always do, but do indicate your inclination, lest you keep me in suspense and indecision, as the whole point of my inquiry was to resolve my doubts.

1 Response to A Chilling Letter from Ancient Rome