Posted on November 29, 2017 by Peter Kruschwitz

I have been looking at the Latin inscriptions of Silchester recently, and in that context I came across a very remarkable item: the so-called Vyne ring: 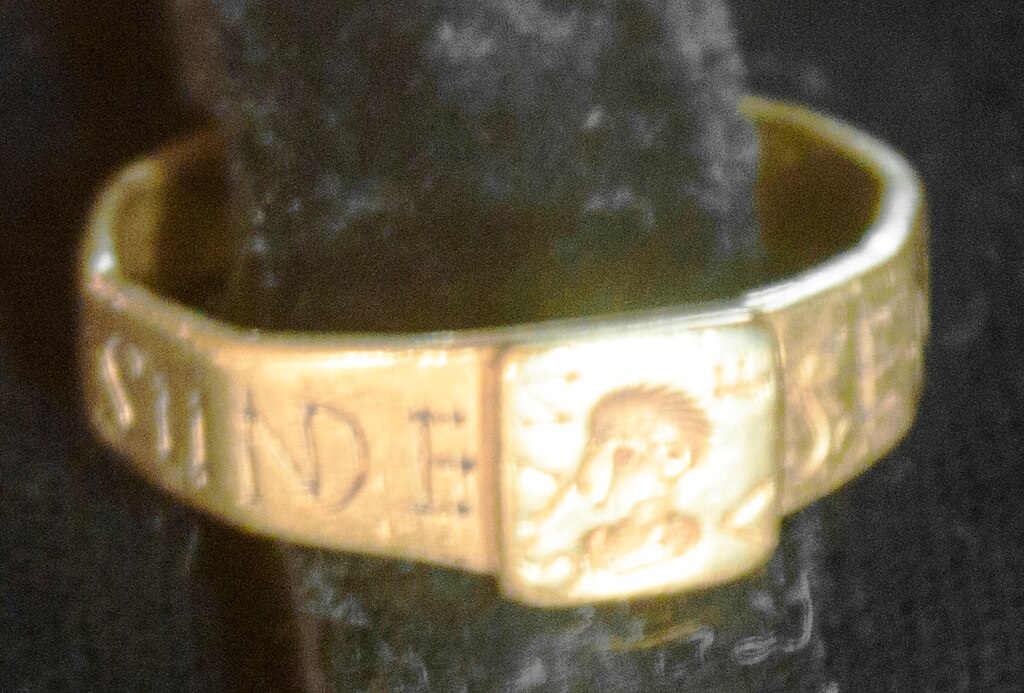 The Vyne ring, around a seal depicting (and naming) the goddess Venus, bears a Christian inscription that reads as follows (CIL VII 1305 = RIB II.3 2422.14):

Senicianus, may you live in God.

Discovered in 1785 in a field near Calleva Atrebatum, Roman Silchester, this piece appears to date to the fourth century A. D.

It would have been a lovely, but otherwise unremarkable find if it had not been for the discovery of a curse tablet at Lydney, Gloucestershire, conveniently dated to the fourth century A. D., that exhibits the following text (CIL VII 140 = RIB I 306 = ILS 4730; image, text, and translation from here):

To the god Nodens: Silvianus has lost his ring and given half (its value) to Nodens. Among those who are called Senicianus do not allow health until he brings it to the temple of Nodens.

The connection between these two items, found far apart from one another, was made by Sir Mortimer Wheeler, who then is believed to have discussed both the curse tablet and the ring with J. R. R. Tolkien, then professor of Anglo-Saxon at the University of Oxford – and it has been imagined by some that this, in turn, may have inspired Tolkien’s idea of Lord Sauron’s ring.

There are perfectly good reasons to be sceptical about this connection, of course: if something is too good to be true, it’s probably not true, as they say – and the starting point for such scepticism has to be, of course, that the name Senicianus or, in its alternative spelling, Senecianus, is not an uncommon one.

Amazingly, when looking for this name in the surviving Latin inscriptions of Roman Britain, another curse tablet comes to light – this time from Aquae Sulis, modern-day Bath (AE 1982.667):

In the translation of J. G. Gager:

(Side A) Whether pagan or Christian, whether man or woman, whether boy or girl, whether slave or free, whoever has stolen from me, Annianus (son of) Matutina (?), six silver coins from my purse, you, Lady Goddess, are to exact (them) from him. If through some deceit he has given me … and do not give thus to him but reckon as (?) the blood of him who has invoked this upon me.

Again the name of Senicianus appears on a curse directed against a thief, ‘whether a pagan or Christian’ (!), as John Wacher points out, the route from Lydney to Silchester, where Senicianus appears to have lost ‘his’ ring (with his own inscription added), could of course lead via Bath without much of a detour. The date of the Bath curse tablet, commonly given as fourth century A. D., would fit the bill as well.

I have given to the goddess Sulis the six silver coins which I have lost. It is for the goddess to exact (them) from the names written below: Senicianus and Saturninus and Anniola. The written page has been copied out. Anniola. Senicianus. Saturninus.

It is all too easy to get carried away in one’s desire to connect the dots on a map and thus to create convenient narratives.

A few years ago, R. S. O. Tomlin published yet another curse tablet from Roman Britain – this time from Leicester. And guess what – a Senicianus features here as well (ZPE 167 (2008) 208):

Would it not be amazing if the (subsequently erased) suspect Senicianus – ring-thief of Lydney and six-silver-coins-thief of Aquae Sulis (on at least one occasion, if not two)  – were to have been our man at Leicester at well?

Well, if it was him, he must have been closer to one-hundred years old before he actually made it to Lydney and Bath (travelling took a long time back then, of course) – the Leicester tablet has been dated to the mid-second to the mid-third century, much earlier than the other pieces mentioned so far.

Captivating stories of rings, deceit, and curses are best written by the likes of J. R. R. Tolkien, not by those who are interested in the history and epigraphy of Roman Britain.

Other than that, we should stick to the established principle that one must be regarded as innocent until conclusively proven guilty, or, in Latin: in dubio pro reo.

1 Response to Once a thief…?